Uncle Tom’s Cabin is a classic written by Harriet Beecher Stowe. The novel was published in 1852 and gained a wide readership. The story follows two main plot lines. That of Tom and that of George, Eliza, and their child.  The latter group are all escaped slaves, a family seeking freedom in Canada. Their passage to freedom is fairly straightforward with only minor detours and close calls. Tom’s life leads him south from Kentucky. His freedom is found in a Christian death.

I have to say, while the book is credited with stoking anti-slavery feelings in the North and South, this 1850’s best-seller is outdated in so many respects. The views against slavery are often undermined by “racialist” points of view. Thankfully not all the caricatures associated with the novel are true. Apparently a lot of the latter antipathy toward the book stems from theatrical reenactments of the novel. . . in the form of minstrel shows. *shudders*

The characters range from Christians who hate slavery to atheists who hate slavery, plus everything in between. And I admire that. I think Stowe is at her best with the characters of George and St. Clare who are good, but complicated people. Stowe should have spent more time on the escaped slave, George, and less on St. Clare, in my opinion. While St. Clare, the good-hearted slave owner, is a perfect character for slave owners of the time to relate to, his narrative spirals into a Christian conversion story. This fails to push the anti-slavery theme since elsewhere in the book being Christian doesn’t mean disavowing slavery. When it appears (and it appears a lot) sentimentalism and over-the-top chapters about Christianity fall flat on modern ears, and apparently fell rather flat even a couple of generations later. Since the Civil War, writers and critics have found more and more fault with the novel and it’s portrayals of African Americas, even though it was likely responsible for heating up the debate against pro-slavery views of the time. To me, if it had a hand in the freeing of even one slave, then the book has value. After all, the views expressed about race weren’t singular at the time. In the end, Uncle Tom’s Cabin wasn’t about ending racism, but about ending slavery.

I wouldn’t recommend reading this novel unless you’re already accustomed to 17th century literature. Fans of Dickens might enjoy certain parts more than I did (they both use ironic narrative ignorance as a humorous literary chide on social mores, which annoys me but also explains why both Stowe and her novel were such big hits in Britain). If you do pick up this book, don’t expect to read something where you’re going to find heroes for the children in your family or classroom. Uncle Tom’s Cabin will undoubtedly make a modern reader a little uncomfortable when it expounds on race and a little bored when it tries too hard to bring tears to your eyes. 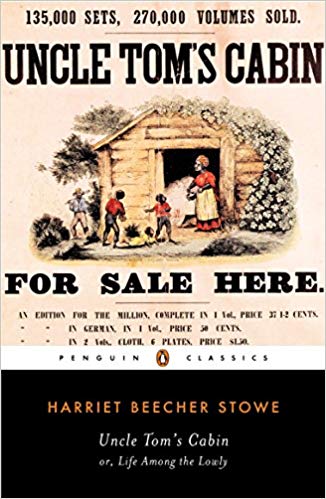