Dialogue #50 for my year-long writing challenge is Ho Ho Ho, Mother-Fucker. When two friends run into an evil Santa, hell-bent on mayhem and murder, they cut him down to size with a critique of the transgression Santa Claus trope.

This was a fun one to write. Here’s some entertaining resources and inspirations for this dialogue:

Evil Santa Claus pictures on The Church of Halloween’s website.

When trying to figure out whether to hyphenate mother+fucker or not,  I found this cool little article on Language Log.

Lastly, a short Loose Canon episode from Lindsay Ellis on the history of Santa Claus.

As I was writing this blog (on Christmas Eve here) I got an interesting phone call, which I made a post about on Facebook and captured an image of it for you. 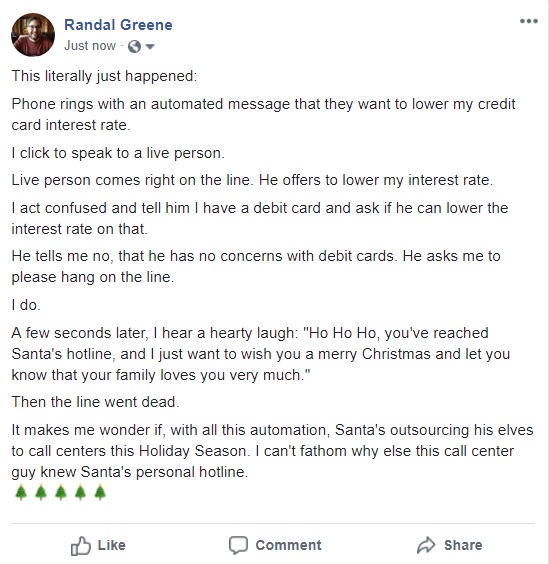 Don’t forget to check out some of my Christmas stories before you go!

Winter Reads: 3 short stories for you to cozy up to with a cup of hot cocoa. 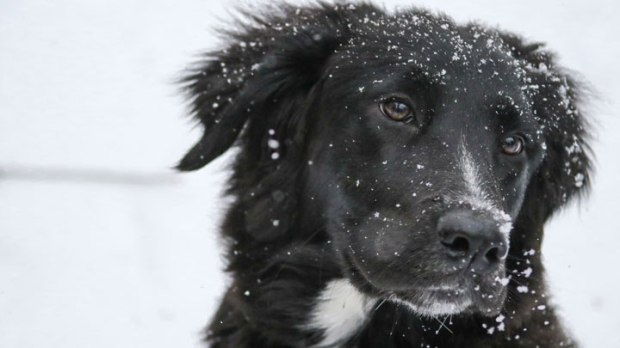 A prose poem about a sad winter night.

❄ ❄ ❄Aunt Phyllis is Yours This Christmas

A funny, slapstick story about siblings at odds.

A meditative story on art in the snow.

Thanks for reading. Leave comment and let me know what you think and subscribe for more. Happy Holidays! 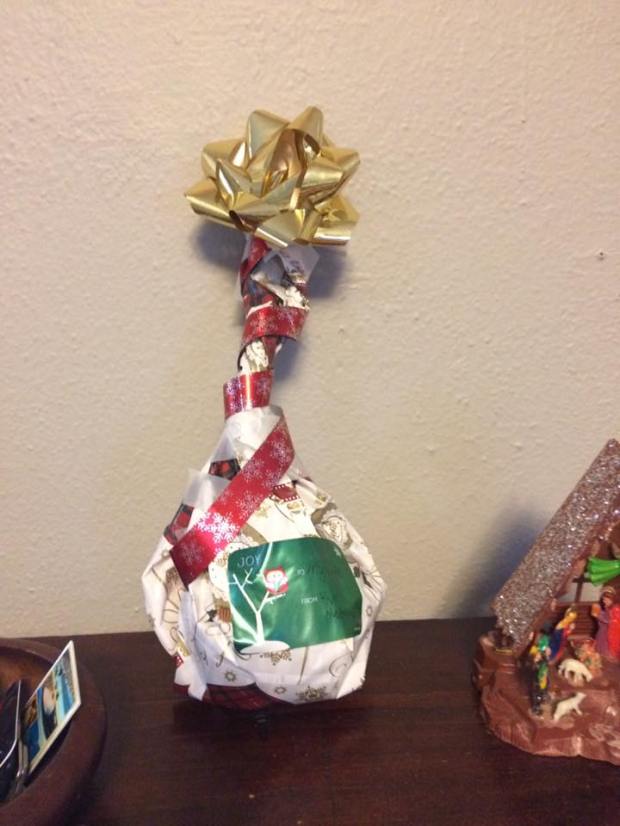 Merry Christmas friends. I hope you had many gifts wrapped with love, if not skill. The picture above is the only gift I attempted to wrap myself this year. It’s a little something for my wife, and it’s a great conversation piece! When Libby saw it she laughed, kissed me, and said, “I love you.”

Have yourself some seasonal cheer, and if you missed it, check out this Christmas story I wrote for a little holiday entertainment. See you all next year!

Sibling rivalry + a house full of drunken swordsmen = a rationale for declaring: “I’ll see you in Christmas Hell!”

Enjoy this comic holiday story that I published on Medium.

If you liked it, you can leave as many claps as you think it deserves. Claps on Medium are similar to LIKES on Facebook, except you can clap up to 50 times. And I appreciate every clap you give. To sign up for Medium so you can comment and clap, just link it to your Facebook or Twitter. I linked mine to my Twitter because one of the founders of Medium actually helped create Twitter, plus I have a larger social media presence there.

There’s lots of great stuff to read on Medium, and chances are you’ve already read some stories or articles published on this platform, which is used by both individual writers and literary publications.

I’ll be posting more stories and other writing on Medium in the future, so get yourself ready to clap by signing up for Medium.